Light up a life brings comfort to local families 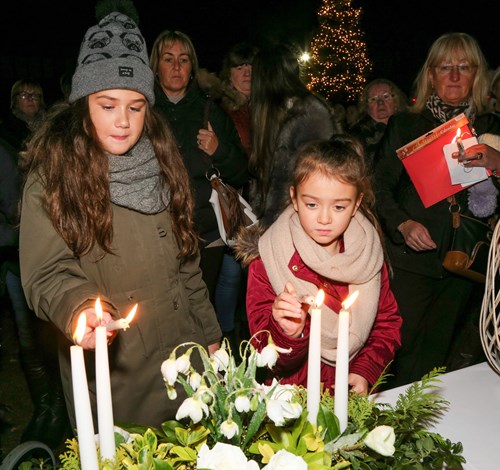 Beneath a stunning winter sunset, hundreds of families gathered at St. Joseph’s Hospice in Thornton on Sunday (11 December) for its annual Light up a Life service.

The 25ft Christmas tree was covered in glittering stars and hearts, with messages left in remembrance of loved ones, and each light dedicated to the memory of much-loved relatives, friends and colleagues.

The St. Nicholas Singers Community Choir sang a number of festive carols for the crowd before the remembrance service began, led by Monsignor John Furnival, with readings and blessings by Bishop Tom Williams, Father Douglas and the Mayor of Sefton, Cllr Iain Brodie Brown.

Ron Noon, whose wife is being cared for at the hospice, also read a poem before the lights were switched on by hospice fundraiser Sean Flannery.

Dedications for Light up a Life can still be made over the Christmas period as a meaningful way to remember someone special, to celebrate life or to give thanks.

Fiona Hollis, from Crosby, dedicated a light to her dad, Mike Harris who died (age 82) in Nov 2014. She said: “My dad passed away just ten weeks after his cancer diagnosis. He was due to go to St. Joseph’s Hospice on the day he died so sadly he didn’t make it but I have been to the Light up a Life service every year since he passed away. I also dedicated lights to my sister Carmel Dunkerley and her husband Michael who passed away over ten years ago.

“Light up a Life is a lovely service. It’s so comforting to be surrounded by others who have been though the same grieving process. We may not know each other but we’re all one big family, all in it together.”

Joyce Johnson, from Thornton, dedicated a light to her husband Frederick who died earlier this year, aged 84. They were married for 60 years. Joyce also remembered her daughter Gillian Johnson (50) who died in 2010. Gillian passed away at St. Joseph’s Hospice following a battle with cancer.

“It was very difficult for me to go back to the hospice for the service as I hadn’t been back since my daughter died there six years ago but, after losing my husband recently, I felt that I had to go as it makes you feel like you’re not on your own. Being together with others makes it a bit easier as we’re all here together for the same thing, to remember those we love. I have left hearts on the tree to remember them both.”

Sheila Stone, from Crosby, dedicated lights to her Aunty Joan and Uncle Dave who both died at the hospice in February this year. She was also remembering her cousin Tony, who died in December 2015, and her friend Lauren who died in October, leaving behind two young children.

“I’ve been coming to Light up a Life since my mum died many years ago. Part of my heart is here because of all the wonderful work they do. I knew Father O’Leary and he was such a wonderful man. St. Joseph’s Hospice is just such a significant part of our local community.”

Mike Parr, Chief Executive of St. Joseph’s Hospice, said: “Light up a Life is a really special event as it enables people to come back to the hospice to remember their loved ones among so many others who have been through the same thing. The service always brings so much comfort to so many families at Christmas time.”

All those who have dedicated a light will be entered in to the Light up a Life dedication book, which will be on display at the hospice until February.

Dedications can still be made by downloading a form. 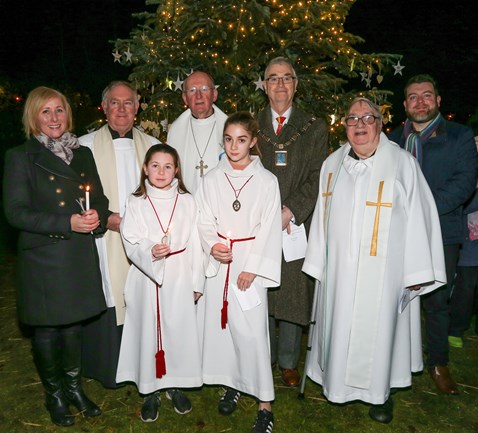