Doreen Woods, from Kirby, was part of our hospice family for just over 10 months until she passed away peacefully in March 2020. We were privileged to spend so much time with her, her husband Eric and their children Lorraine, Denise, Martin, Carmel and Nicola, who has kindly offered to share their story as a tribute to her mum. 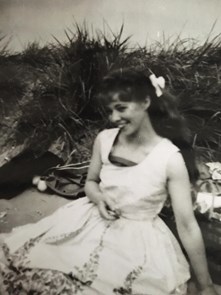 Doreen arrived at St. Joseph’s Hospice back in May 2019 at the age of 81. She came to the hospice from Aintree Hospital after suffering a major a stroke on Mother’s Day, 31st March 2019. The stroke was sudden and completely unexpected.

Doreen was left without any mobility in her right side and it severely affected her speech and ability to swallow. Nicola said: “I remember the doctors said it was a miracle she’d survived the stoke as it was so catastrophic.

“I was very close to my mum and have many warm, happy childhood memories of her. My dad used to work nights, which I loved, only because it meant that I got to sleep in with my mum. She was such a kind and gentle person; very family focussed. When she first went to the hospice, we didn’t want to leave her on her own, so we stayed with her every night over the first few weeks.

“About 7 years ago, mum started showing signs of dementia. She knew who we all were and where she was, but she could get a bit confused and muddled with words sometimes. After the stoke, everything changed. We drove straight to the hospital and the doctors told us she would never walk or talk again, and they really weren’t sure how well she could see or hear.

“Over time, we began to see small glimpses of her in the way she moved her hand when we were listening to music. We still had hope and were determined we could see some rehabilitation, but then our reality check would kick in and we knew, deep down, she wouldn’t recover.” 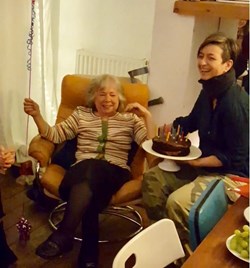 After two months at Aintree Hospital, the doctors explained that Doreen might decline quickly and that she and the family would be more comfortable somewhere more peaceful and suggested St. Joseph’s Hospice.

Nicola said: “We’d never heard of the hospice and didn’t have any idea what it would be like, but I pictured a soulless care home where my Mum would be left alone but I couldn’t have been more wrong.

Myself, my dad and brother visited the hospice and were shown around by Andrea, a lovely nurse who spent time with us. It was so different to a hospital. When we moved mum in, they talked us through everything and showed us around. It was so reassuring. The grounds are beautiful and peaceful and Mum had a view of a hydrangea out of her window, just like the one in her garden at home. I hoped mum might recognise it and connect it to home.

“We were able to decorate mum’s room, so we put up fairy lights and brought in plants and photos and even her own blankets; it was a very personal space. We always played music for her and used her lavender oil burner.

“Once we were at the hospice, the care extended across the whole family, especially my dad. Mum even started to become more animated and would nod and try to join in conversations. She even formed the odd word. She was eating better and, although her eyes were closed most of the time, she was never in distress.

“She would have loved to have been at home, who wouldn’t in an ideal world? But the hospice really was a saviour and, in a strange way, mum’s dementia meant that she didn’t worry about being at the hospice. Dad was there with her every day and they would chat and listen to music. We used to stay overnight with her too. We’re very lucky to have such a big family so there was always one of us there with her.” 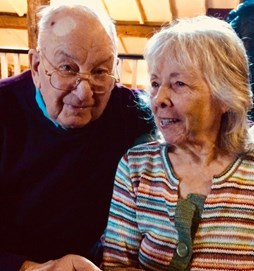 Sadly, in early March 2020, Doreen’s condition worsened, and she found it increasingly hard to swallow. She slipped away peacefully on 24th March, almost exactly a year to the day since she had the stroke.

Nicola said: “We visit mum at the cemetery every week and we’ve planted loads of wildflowers there. We usually drop in some cakes and biscuits for the nurses at the hospice on our way to the cemetery. While mum was there, the hospice became our home and the nurses and carers became our extended family. They got to know us all so well and we honestly felt like we were being held and supported by them throughout the whole time that mum was there.”