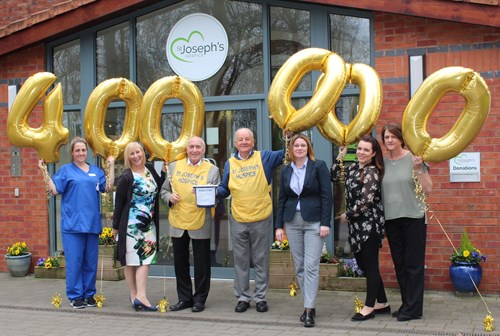 Bucket collectors, Don Franks and Charles Callaghan have raised a staggering £400,000 for St. Joseph’s Hospice over the last 17 years.

The retired pair have faced all weathers and have spent, in total, 800 days standing outside train stations, sports grounds and shopping centres, wearing their yellow hospice vests and greeting passers by. They have collected on average £25,000 per year in aid of the Thornton-based hospice, which cares for local people living with life-limiting conditions.

Don (85), from Formby, and Charles (79), from Ainsdale, are well-known characters around Merseyside. Don is known for his cheerful signing and dancing whilst collecting for the hospice.

Don and Charles started collecting in 2001 when Don’s wife, Francis, heard that the hospice was trying to raise money for a new bed. Their determination and passion for the hospice led them to completely smash their target of £1,000 in the first year, by raising £14,000 in the first four months!

In recognition of their tireless work, Don and Charles were invited to Downing Street by Cherie Blair, Vice President of St. Joseph’s Hospice, in 2007. In 2012, they were invited to a garden party at Buckingham Palace and then, in 2015, Don and Charles were honoured with British Citizens Awards at the House of Lords for their inspirational efforts.

Don said: “We collect for the hospice for around three days every month and raise on average £500 each day between us. Our best day ever was in 2003 when we collected at Woolworths just before Christmas and took £1,350. Everyone was incredibly generous."

Charles added: “We enjoy it so much and we’re always bowled over by how generous people are. We are very grateful to the people of Sefton and Merseyside for their magnificent generosity as without them, this huge figure would never be possible.”

“We have met some wonderful people over the years, including celebrities and VIP’s but also so many generous, kind and supportive people from our local community.

“We’re both very proud to live in Merseyside and we will continue to collect as much as we can in the coming years.”

Mike Parr, Chief Executive of St. Joseph’s Hospice, said: “There simply aren’t words to describe the contribution that Don and Charles have made to the hospice over the last 17 years. They have not only showed incredible commitment but have also made so many people smile. From cheering up commuters on a rainy day to making the last days of so many people’s lives warm, loving and peaceful.

“I would like to thank Don and Charles from everyone here at the hospice for their continued hard work and for their devotion to our patients and their families over the last 17 years.”