One Merseyside man who crossed the finish line at the Liverpool Half Marathon last month is undertaking an extremely demanding challenge in memory of his mum.

Pete Waugh (48) lost his mum, Nora (74), in 2016 after a brave battle with cancer. She spent her final days at St. Joseph’s Hospice in Thornton and Pete was so overwhelmed with the “total devotion, care, compassion and utter brilliance of the wonderful staff” at the hospice that he wanted to do something to contribute.

Last year, Pete decided he would run 13 half marathons over 13 months in 13 different counties to try and raise £2,000 for the hospice. The Triple 13 Challenge was born but, as a 48-year old non-runner, it was no easy undertaking.

All 13 half marathons were selected with a great deal of care – each one representing a special place in his mum’s heart, from fond family holidays and days out to where her friends and family live. He started in Windsor (his mum’s favourite place was Windsor Castle) in May 2017 and will finish on the Mull of Kintyre in May 2018.

The Liverpool Half Marathon, which was race 11, held a very special place in his heart as it was where he grew up and became a life-long Evertonian. His parents also lived in Maghull so they have lots of friends and family in the area.

Pete’s Triple 13 Challenge has taken him to all four corners of the UK and even included a race in Canada where his mum’s brother, Colin, lives. Colin followed Pete around his 4th half marathon in Canada on his bike and made the journey over to Liverpool to support Pete in his hometown on Sunday. His cousins, Alison and Chris, also flew in from Toronto to surprise him and ran the race with him. His mum’s sister, Joan, was also there to cheer him on.

Pete said: “My mum was a stoic, popular and giving person; never one to judge. She always saw the good in everyone. It was a cruel hand that was dealt as my dad died at just 51 years old and, just as my mum had rebuilt her life, cancer stole her from me.

“As an only child, my connections with home are dwindling, as I now live in Hertfordshire, but I will never forget the heroic and wonderful people at St Joseph's Hospice. Their care, compassion and complete dedication to mum and my family made this difficult time more bearable. I'll personally be forever in their debt.

“The Triple13 Challenge seemed such a simple idea but, as a 48 year old non runner, the novelty soon wore off and reality began to bite. After eleven half marathons, my hamstring is done in and each race hurts but it’s nothing compared to the pain that my mum bravely went through.

“The Liverpool half marathon was so special with my uncle Colin, who is 75, and my cousins travelled all the way from Canada to support me. My Mum's sister Joan was also there to complete the family and show her support.”

Laura Smith, community fundraiser at St. Joseph’s Hospice said: “We would all like to congratulate Pete on completing his11th half marathon in Liverpool on Sunday. Pete is undertaking a massive challenge and we are so incredibly grateful for his support and for putting himself through 13 really demanding and very poignant runs to raise money for the hospice.

“Pete has just two more half marathons left but he is struggling to raise the last £600 of his target. Please show your support to Pete for everything he has been through in the last few years by donating to his Triple 13 Challenge via JustGiving.com at the address below. We wish Pete all the very best for his last two runs. We’ll all be rooting for him”. 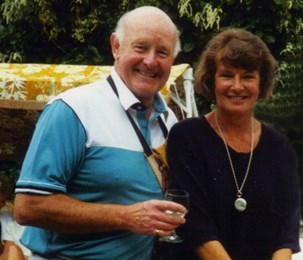 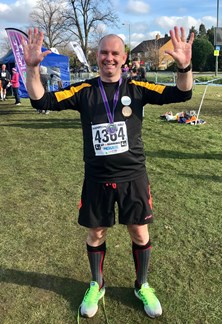 Pete at his 10th race at Hampton Court (left) and (right) his mum and dad.

Top: Pete with his cousins Alison and Chris at the Liverpool Half Marathon.